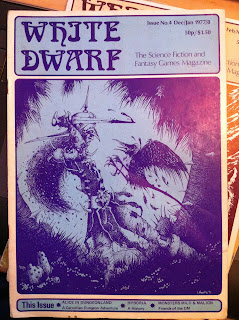 White Dwarf #4, January 1977
Early White Dwarf is vintage old school. There was no Games Workshop products in my area growing up, and nobody I know of even heard of White Dwarf. It wasn't until I was an adult in the US Army stationed in Ft. Carson Colorado that I was exposed to White Dwarf and the Warhammer universe.
Later White Dwarf magazines became a house organ to Games Workshop and pretty much exclusively promoted only their products, so I didn't really get into it. However, my interest in 1970's DnD has compelled me to dig up early White Dwarf magazines. And they are incredibly satisfying. Scratching an itch for old school that only pre #30's Dragon and Dungeoneer magazines scratch.

White Dwarf #4 closely resembles early Dragon and Dungeoneer magazines. In fact reading this issue one wonders what DnD would have been like with different creators behind it. There is a great article on a Barbarian class (which TSR would not publish a version of until July 1982 in Dragon #63). It is fun to see the differences and similarities. Both have tracking skill, but that is about where the similarities end. The White Dwarf Barbarian strikes me as being much truer to the spirit of the original edition.
Other articles that predate later TSR offerings include Alice in Dungeon Land (astute readers will recall Gygax's great Dungeonland module), and an article on competitive DnD which was a little hard for me to decipher since it is the 4th in a series of articles which I don't have. All in all early White Dwarfs are a great read for anyone interested in the formative years of DnD (and the hobby in general), but they are much harder to come by than Dragon is. I would very much enjoy a compilation of White Dwarfs like the Dragon Magazine CD archive.