When does Original Edition end and 1st Edition Begin?

For a personal project I have been reading the issues of Dragon magazine around the time of the release of the 1st edition books to try to ascertain when exactly the transition from the original LBB's to 1st edition really began. 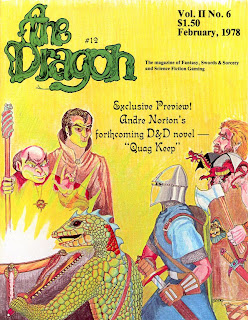 Even the articles are still for original edition. For example the Witch article in The Dragon 20 could be played with nothing more than the LBB's. Not until The Dragon #22 do we finally get the memo. AD&D is the future, original edition was the past. Sure enough the next issue features an article "Random generation of creatures from the lower planes" which is clearly designed for 1st edition.

Still, original edition didn't go down so easily. Articles continued predominately to support the original, while 1st edition articles were few and far between for several issues.

The Dragon 28 features an interview with Gary Gygax about the publication of the Dungeon Master's Guide. Then the very next article is "A short course in D&D" an article about D&D, not AD&D. Though it mentions the Player's Handbook (and the Holmes Basic I assume) in a way that sounds like it is merely an extension of, not a replacement, of the original D&D. Though I must say the next issue #29 is really beginning to feel "1st edition", but in a way original edition players wouldn't feel alienated (in fact, I doubt there was any divide yet).

The Dragon #30, October 1979, is the first to mention the infamous disappearance of James Egbert. TSR couldn't buy publicity this good. They went from an obscure popular game amongst the niche wargaming crowd to a worldwide phenomenon in a short time. At this point the full 3 volume 1st edition set was available on the market, and is predominantly what new players would know about the game (and the Moldvay edited basic set soon to be released).

The Dragon #31 introduces Sage Advice. A controversial feature amongst the OSR to be sure. It represents a changing mood in TSR from encouraging freeform play amongst D&D players, to more official "rulings" from on high. This is really starting to feel like the 1st edition era now. Still, most of the D&D related articles look like they'd work perfectly well in either an original or 1st edition game.

The Dragon #32 has much relatively generic material that could pretty much be used in any edition, and it has an adventure called The Fell Pass that feels very original edition. The Dragon #33 seems to really be all about 1st edition. Perhaps one article Bazaar of the Bizarre could be used for both, but the other article plainly state "AD&D". I'm ending this particular exercise here. I'm sure there are a few original edition oriented articles, but the tide seems to have clearly turned at this issue. 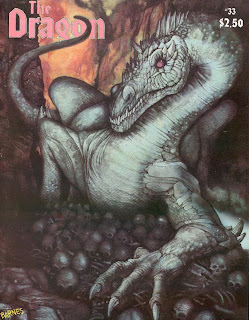 So there seems to be a broad gray area from February 1978 through January 1980 where original edition was phased out and 1st edition takes over. Sure The Dragon is a limited slice of the gaming pie from that era, but I suspect it is pretty representative.