Swords & Wizardry is no replacement for the Original Edition 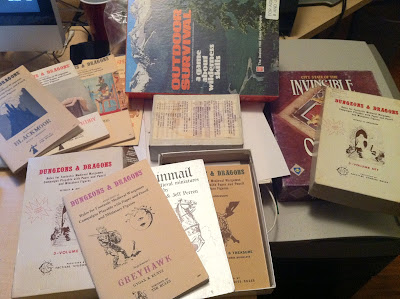 I started this blog when I discovered Swords & Wizardry. S&W introduced me to this exciting movement known as the OSR. I loved how well written S&W was and how well it emulated the original edition of the original, and best, fantasy role playing game. Since then I have played many hours of S&W, exploring it's strengths and weaknesses.
I soon came to the conclusion that S&W was a different game from the Original Edition. A beautiful, and succinct emulation, but different nonetheless.
As I have immersed myself in classic D&D blogs and forums like Knights & Knaves, Grognardia, and others, I came to realize the whole OSR thing was much larger, more creative, and more interesting than I had imagined. I was drawn to the original edition - the "white box" set; the original 3 booklets. I have 2 copies of this set. One in good condition, the other previously owned by Lawrence Schick, that has some markups and design notes written in ink in it. This is the version I have taken to playing lately. And I can wholeheartedly say it is better than Holmes, Basic, AD&D, 2nd, 3rd, 3.5, or 4th edition. There is just some magic that the original edition captured that none of the later editions have. Perhaps it is in the ambiguity and the largely undefined nature that allows the DM to ad lib according to the needs of his own group, But, whatever it is, there is a mystique and a magic to those first 3 books that is unmatched by any later edition, or later RPG I have seen. Which is why I have returned to playing the Original Edition lately.