This has nothing to do with the WotRP project I am working on with Al of www.Beyondtheblackgate.blogspot.com I found this interesting article after reading through some old The Dragon magazines, and thought it was a great and relevant description of John Carter. I particularly like that he has a permanent Tower of Iron Will. Nice touch!

John Carter was originally an average earthman, but has become a sort of immortal, archetypal warrior; he can recall no childhood, just an endless series of wars and martial endeavors. He always seems to be physically about the age of 30. After serving on the Confederate side of the American Civil War, he went west as a prospector. Trapped in a cave by Indians and mortally wounded, Carter, on the verge of death, somehow psychically transported himself to Mars (or Barsoom, as it is known to its inhabitants). Mars’ gravity is only one-fourth that of Earth, so Carter instantly became the strongest humanoid on Barsoom, with a relative D&D strength of 20 (for game purposes, always treat John Carter as if he were on Barsoom, as this is his heroic environment in the novels). Carter freed Dejah Thoris, Princess of Helium, from the Green Men of Barsoom, eventually married her and became Warlord of Helium (and a good deal of the rest of the planet).

Carter’s Mars is a world of paradoxes. Barsoom is a dry, dying planet, studded with abandoned cities and ancient races, falling gradually into barbarism. There is a universal code of honor for hand-to-hand fighting, which states that if one man draws a certain weapon for a duel, his opponent will counter with the same or a lesser weapon. Barsoomian fighters (including John Carter) are usually armed with a dagger (1-4 damage +10), short sword (1-6 damage +10), and long sword (1-8 damage +10). In addition, they carry a pistol, but this is rarely used save by cowards or in wars. Carter abides by the code of honor, and will respond with the same type of weapon he is attacked with (regardless of the number of opponents), unless he is attacked magically (which he may interpret as some sort of psychic attack). Then there is a 50% chance each attack that he will feel justified in using his pistol against the magic-user. This pistol contains five rounds, each doing 1-10 damage if they hit. All five rounds may be fired in one melee round.

John Carter is about six feet tall with short black hair and gray eyes. Like all Barsoomians, he wears no armor; only a leather harness for carrying his weapons. His great strength enables him to move in giant leaps. He can jump up to 20 feet high, and leap right over the heads of his opponents. He will generally try to help anyone he thinks is in trouble, but if he is doublecrossed or finds out he has been deceived, he may go into a fighting rage, attacking everyone he can reach until all the miscreants have been punished. Honor in battle is exceedingly important to him. John Carter has long fought the Guild of Assassins on Barsoom, considering them honorless fighters. If he recognizes that a party member is an assassin, he will disarm him and force him to leave the party (for the party’s own good). He will give the assassin his own dagger so he has a fighting chance of reaching safety.

Psionically, Carter has a permanent Tower of Iron Will; no one has ever broken it. Over the years he has honed his ability to teleport between worlds, and he is likely to show up anytime, looking for adventure. 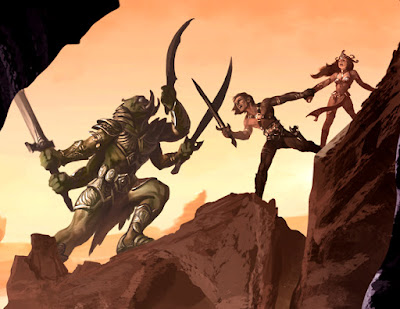