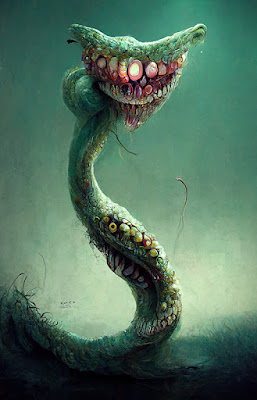 Luring Hum: target must save vs spells or be charmed and put its ear near the Ear Worm.

Larvae: devour their prey from the inside over the course of 3-18 days.

This dangerous carnivorous worm emits a pleasant hum that lures prey, when the target is near the worm jumps into the victim’s ear. This temporarily immobilizes the victim who will then be slowly devoured by the Ear Worm’s acidic juices. It will lay its eggs, which will hatch larvae that devour the prey from the inside.

It will not be obvious from the outside that a host is infected with Ear Worm eggs, they will lose 1 Intelligence point per day so will slowly become more vegetative.

The larvae can be removed by a loud thunderous sound, which is likely to cause damage to the host and a hum will persist and resonate in the victim’s ears for 1-6 weeks making them temporarily deaf. Lost Intelligence points will not recover unless a Cure Serious Wounds or better is used.