Raiders Preview & Monster of the Week

Perhaps the most classic of monsters that fits in the archeological adventures genre is the mummy! This is the current write up for the mummy entry in the Raiders core rulebook. It is still being tweaked, so there might be some differences in the final published version. And as you can see the art is still rough sketches. 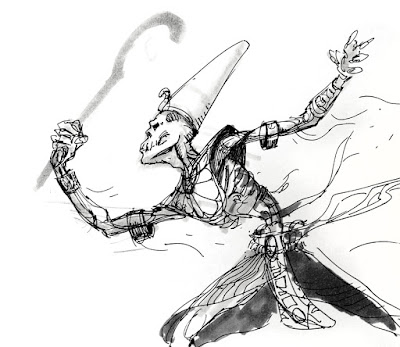 Mummy
Undead
HD: 6+4
AC: 3 [16]
Atk: touch (1d6+special)
Save: 13
Move: 60’
CL/XP: 7/500
Special: Varies; Rot, hit only by magic weapons
Mummies are corpses, often of rulers, priests, or magicians, that have been preserved through embalming, desiccation or other means, with  has often sustained a lingering life force easily reanimated via magic or divine curses. Not just Egyptian, mummies are found in the many places in South and Central America, as well as Turkestan. Of special interest in the 1930s are the mummies of the Canary Islands, as these have been found with blond hair, suggesting to the Nazi archeologists that they might be significant figures connected with an ancient Aryan super-race!) Mummies are corpses that have been preserved through embalming, desiccation or other means. Mummies cannot be hit by normal weapons or bullets, and even magical weapons or heavy weapons like grenades or cannon inflict only half damage against them. (They may be vulnerable to full damage from fire or flamethrowers, if they have flammable bandages.). Sometimes their touch also inflicts a rotting disease which prevents magical healing and causes wounds to heal at one-tenth of the normal rate, curable only by an artifact or rare spell that removes the curse. Others have even greater powers such as summoning up insect plagues or sandstorms (range 30’, automatic 1d6 damage/round over an 60’ radius for 3 rounds) to bedevil their foes, or having the ability to steal life force and shed their mummified corpse bodies for a newer rejuvenated body. 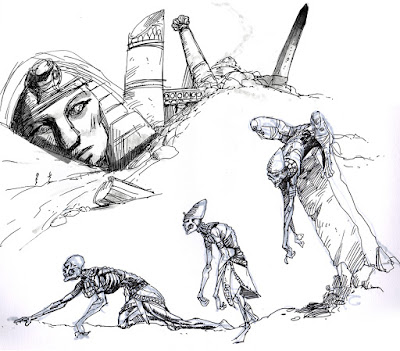