What if the original Monster Manual had also listed Traps amongst the various creatures you could encounter in the DnD world? I've often thought about a monster book that was treated more like an Encounters book, so it would be filled with more than just nasty beasties, but also NPC's, traps, situations, and other things of that nature. Encounter Encyclopedia? Encounters & Engagements? With that in mind here is a Trap in a similar format to the Beasties I've been posting. When I put together a Beasties II book I think I'll include several entries like this.

This one is classic, if a bit simple and straightforward, I'll make some more clever and devious traps in later entries of this series! 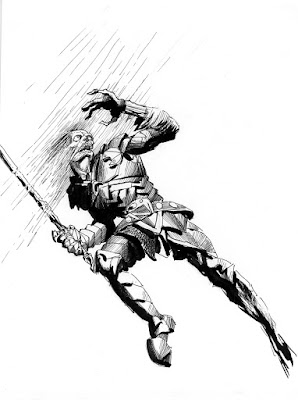 Acid Shower
Trap
HD 3+1
Diff 16
Dam 2d6 + 1d6/turn 1-3 turns
Save -2
CL/XP 3/200
Special: ruins armor
The Acid Shower is one of the most terrifying traps an adventurer can encounter. A caustic liquid sprays in a 10’ radius, affecting everyone in the area. Victims will immediately take 2d6 points of damage and must save or take an additional 1d6 points of damage each round for the next 1-3 rounds.
The acid also destroys any armor and clothing the character is wearing.
Immediately removing armor and clothing will prevent the additional damage, but the armor will be ruined and unwearable.