This leaked out a little earlier than intended. Steve Perrin and I have been working on a hard sci-fi game utilizing the Original Edition format. Just in case you don't know Steve Perrin is the creator of Runequest along with many other roleplaying games. His design work goes all the way back to the very early days of RPG's and he has a great handle on "old-school" gaming.

Robert Heinlein is one of my favorite authors and I've read every one of his books I've been able to find, some of them multiple times. In particular Starship Troopers. This book has been influential inspiring the colonial marines in Aliens, battle-mech games and shows, and was the first to have troops with powered armor, as well as being a brilliant commentary on the responsibility of citizenship. Contrary to its portrayal in the Starship Troopers movie the lead character is Philippino, not vanilla, and it does not glorify fascism. It does honor heroism and military service.

This served as inspiration for a re-imagining of the Original Edition as a hard sci-fi game. From the back cover:

What if the first RPG was inspired by hard Science Fiction as written by Robert Heinlein, Poul Anderson, Isaac Asimov, and Frank Herbert instead of Tolkienesque fantasy?
Colonial Troopers is a science fiction RPG compatible with the original fantasy roleplaying game and subsequent editions, and other “OSR” games that follow in the mould of the original like Swords & Wizardry, Adventurer Conqueror King, Labyrinth Lord, Guardians, and Warriors of the Red Planet. If your tastes run towards battle hardened combat armor, some attention to real physics, and explorations of just what it is to be human, you’ve found the right book. As in the fiction of the above writers, the players are confronted with an unforgiving universe full of wonders and deadly quirks of science ready to astound and enchant, and cull the unwary.

I think Steve did a brilliant job on the book and meshed the source material together in a cohesive, compelling, and exciting game book. It is chockfull of great ideas and substance that you can play in this stand alone book or pull into your other OSR game. Just like Warriors of the Red Planet and Guardians it is fully compatible with the Original Edition fantasy roleplaying game and related systems.

The PDF is available now, the print edition will be available as soon as it is approved by RPGNow. 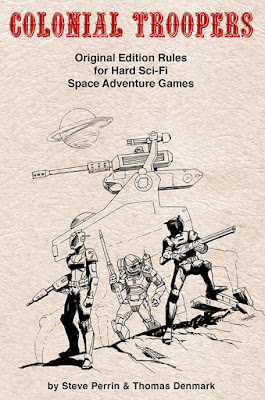