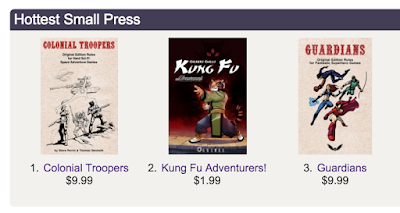 Thank you so much for the overwhelming positive reception to Colonial Troopers! This is a project that goes way, way back and is the evolution of a sci-fi universe I imagined many years ago. Originally it was going to be a card game much like Dungeoneer (and still may be someday), but it developed into such an interesting collection of worlds and ideas that an RPG seemed to be the best expression for it. Then Steve added his own special take on the whole concept that got me excited to publish it and start supporting it.
A G+ community has already sprouted up and I've been receiving excellent feedback from various players. I'm actually caught a little by surprise. I guess part of it is there really was a missing hole in the OSR for hard sci-fi. I mean of course there is the classic Traveller. But Colonial Troopers is focused squarely on the military expression of the concept, which I'm sure many GM's appreciate as it can make adventure design a little more straightforward and easier to manage where players choose to go. For me that has always been the difficulty in running space adventure games is that players can just warp to whatever planet they feel like and it can be extraordinarily taxing to constantly have to come up with new worlds, NPC's, and adventures when you don't know where they may end up!
In the coming days and weeks I'll try to make sure Colonial Troopers is supported with adventure material and the like. I think the first thing I need to work on is a useful character sheet. I better get to work on that.