Wrath of the Immortals - ability scores 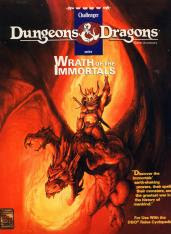 I thought I was being original when I speculated what stats in original D&D would look like if expanded up to 30. Little did I know Aaron Allston beat me to the punch in the Wrath of the Immortals set.

This is one expansion to basic D&D that I missed out on, and only recently won on eBay. Reading through the set I found the first couple of chapters booooring. But with the 4th chapter "The Immortal Character Class" it suddenly became very interesting. Then I saw this handy little chart: 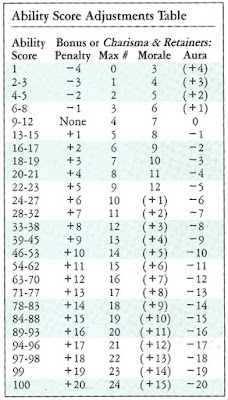 Not only did Mr. Allston beat me to the punch, but he took it all the way to a hundred. Wowzers! We would have so geeked out over this book in junior high, when we were using the Deities and Demigods as our high level monster book.

I've long since stopped enjoying power for power's sake in RPG's, and currently find nothing more fun than those first few levels when your scratching around for a +1 sword scared of your own shadow. (unless your playing 4th edition, which pretty much starts you where Wrath of the Immortals ends. That is hyperbole, of course, but only a little.) However, Wrath of the Immortals struck me as a really good primer for adapting D&D rules into a superhero game! It wouldn't take much, detail out a few more powers and you could stat out Superman and Wolverine with this book.

I can't imagine ever playing this as is, but as a superhero game the possibilities intrigue me.

Note: apparently this table is reprinted from the Immortals boxed set of 1986