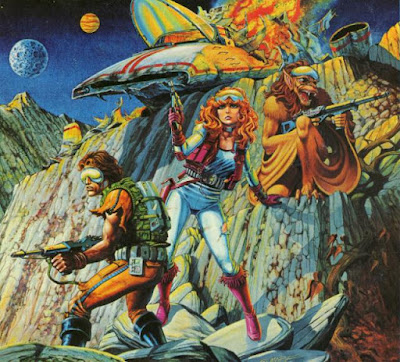 I was never aware of the existence of Traveller in my teens. It may have been advertised in Dragon, but I don't recall. I'm such a visual person the lack of art would have turned me off anyway. So Traveller holds nothing for me, Star Frontiers was our sci-fi game of choice.

Larry Elmore may be even better at sci-fi than at fantasy. I loved his tech designs in Star Frontiers - the ships, the laser guns, and the outfits. This cover image is absolutely exploding with fun - I immediately knew what kinds of adventures we could have in Star Frontiers. Looking at it now I recognize how cheesy it is, but in the 80's everything was cheesy anyway. 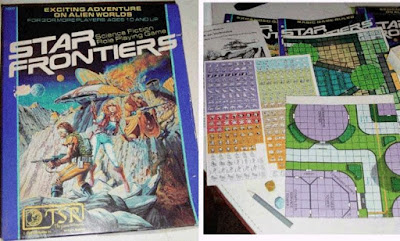 This came out in the golden era of TSR box sets. Before RPG's became bloated monstrosities, the rulebooks were just right at around 64 pages. We were able to understand the game, and have hours of fun roleplaying adventures, why did rulebooks ever need to be any larger or more complicated?

This game had everything you'd want except spaceship battles; weird alien races, strange planets to explore, and a mysterious enemy: the sathar! I loved how the illustration in the book was a dissected sathar, because there were no live specimens.

The game was a simple roll-under skill percentage. It was a little like OD&D meets BRP (Basic Role Playing: the Cthulhu/Runequest game system).

Of particular interest to grognards is the way Star Frontiers was really an old-school game. It was wide open, fly by the seat of your pants gaming. Not every little thing was defined. The skill system was loose and one of the best designed in my opinion.

As much fun as we had with Star Frontiers: Alpha Dawn, it was the publication of Knight Hawks that made the game a full sci-fi experience. Now we could have spaceship battles. The set came with a remarkable amount of counters for various ships. It was a rather cool boxed set. 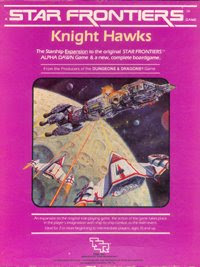 Interesting side note, Moldvay had his hands in the game, particularly in the included Volturnus modules which had laser-mounted cyborg dinosaurs! How cool is that? My respect for Moldvay continues to grow.