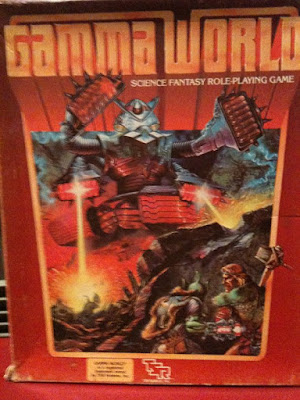 Gamma World is the first RPG I played that wasn't D&D. I was introduced to GW with the 1st edition, but the 2nd edition was the first one I owned, so that edition is Gamma World in my nostalgic mind.

Gamma World is very similar mechanically to classic D&D: hit dice, armor class, abilities (wisdom changed to "mental strength"), it's all there with only classes, levels, and elves removed. To this day I don't understand why TSR kept trying to make new RPG systems when they already had the world's best - and best selling - RPG: D&D! How much more fun if Lolth, Cryptic Alliances, Yzarians, Spiderman, and Indiana Jones could exist together. The imagination boggles at the possibilities.

This was in the 80's. We had the cold war and Thundarr the Barbarian. So in a way Gamma World made sense then, though it seems ridiculous by today's standards.

Thumbing through my old copy I recall it was the first time I'd seen the 3-column layout used, which TSR became addicted to for a while so they could cram more words on the page. Also, Elmore did a lot of drawings for this game. I do so like his pen & inks. And Keith Parkinson was just starting to find his voice as an artist.

If I was to grade the editions I'd have to say 1st and 2nd edition where the high water marks. It went downhill from 3rd on. TSR fell in love with the Marvel Superheroes "column shift" system and slapped it onto Gamma World and it didn't fit well. 4th was a bit like 2nd edition AD&D, which wasn't all bad, but the book felt rushed and incomplete as did 5th edition. 6th is an abomination, I don't even want to talk about it.

Jonathon Tweet probably caught the spirit best in his "Omega World" tribute to Gamma World in the hallowed pages of Dragon magazine.

Occasionally I daydream about starting up a classic Gamma World campaign, but I feel it's one of those things probably best left in my warm memories.