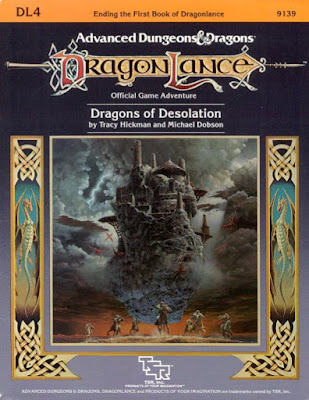 Dragonlance. For grognards the very name conjures up images of characters being railroaded through a storyline. The beginning of the end for "old-school" gaming. Considered to be mediocre derivative fantasy at it's worst by some.

For me, being the visual person I am, Dragonlance was the most compelling thing I'd seen in all my (then) 15 years on this planet. I've mentioned before that J.W. Waterhouse and Herbert Draper (19th century painters) were my inspiration to become an artist. It was Keith Parkinson, and specifically his Dragons of Desolation cover that made me want to become a fantasy artist. When I saw that ominous flying castle my mind was sufficiently blown.

For a moment, let's look at the first few Dragonlance modules not as the railroad stories they are, but as adventure locales - and you can see they really are compelling, even from an old-school perspective.

In DL1 Dragons of Despair, it had a village in huge vallenwood trees. It had a dungeon that was a collapsed, sunken ancient city. It had a mysterious elven forest. And the draconians, though almost a cliche now, at the time where new and interesting foes.

In DL4 pictured above it had a flying-freakin'-castle that was an ancient tomb! That is cool in so many ways. Or as we would say in the 80's, it was "rad"!

As a kid I did think the series got quite strange, and practically unplayable, sometime after DL6 Dragons of Ice (with the exciting ice boats), and I don't remember playing any of the others in the series except DL11 which turned out to be a wargame (I played the draconians and lost, badly). I recall being quite surprised it was not actually a module after excitedly buying it at the game store and bringing it home to open.

But, DL4 Dragons of Desolation still conjures up those deep feelings of nostalgia everytime I see that cover. It brings back memories of drawing characters for the other players, reading the novels, and our gaming sessions being nothing like the books - but much more fun in my opinion.

Interesting side note: that Dragons of Desolation painting came up for sale on eBay once. I had just gotten a bonus at work and had just enough, it was going for about $3000. My friend warned me that I would regret the purchase. It was a hard decision, but that was a lot of money, so I let it go. He was right about one thing, I do regret - but not in the way he thought, I regret not having purchased it.