Getting this blog back on track, let's continue to develop the Monastery Ruins. We've already talked a bit about putting the original map in isometric, and thinking about the depth of levels (much more to develop on that later), so lets move to what the ruins looked like when they were pristine.

This will help us develop some back story, and help to put some context to the adventure site.

I firmly believe in site-based adventures, and instead of rail-roading the players through a preconceived story, I prefer little "story nuggets": NPC's with interesting back stories and motives, places with interesting history to them that the players can discovery. Put enough cool stuff for the players to find - and the story will make itself as they play through the adventure.

The first original map we need to make is the monastery itself. This is extrapolated from the concept sketches. A key to an interesting adventure site is some variety and a focal point. The focal point is obviously the monastery itself. For variety we have a river, a bridge, and some tree groves. This will provide enough features we can populate with monsters, traps, and treasures, all with a focal point to lure the players to. 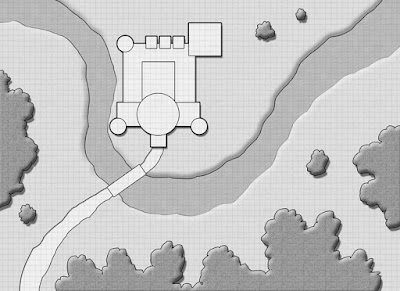 I haven't developed a key yet, I prefer to rough in some adventure ideas first, then think about placement. That will come later. For now we have a solid base to start deconstructing the ruins from.

I have this idea of perhaps having a prologue to the adventure, where players play different characters in an earlier time when the monastery was still new and vital. The actions they take then will affect the future - the players will see the results when they play the rest of the adventure later. But, it's only an idea for now I have to think about it more.