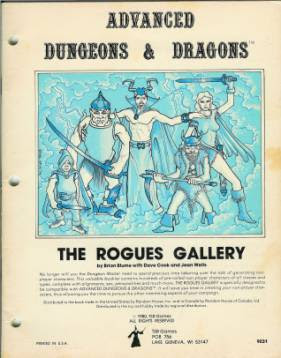 Ok, I have to redeem myself for that last post. While Dragonlance has a warm fuzzy place in my heart, I realize that likely readers of this blog in general do not hold such introsive, heavy handed story-railroading in very high regard. In my defense I did try to focus on the art (I consider many of the DL covers to be stunning) not the plot.

#7 on my list is The Rogues Gallery. There is little I can say that James Maliszewski hasn't already noted. So I'll try to avoid being a "me too" post (an impossible task).

The first 2/3rds of the book is not particularly exciting, just lists of numbers. It did have some utility for those on-the-fly npc's that are often needed in the heat of running an adventure. Especially as player's tend to do the unexpected. It was the last 3rd of this book that really shined and makes this product rank #7 in my favorites.

After the rote spreadsheet-style npc lists, we get some interesting and useful things like sages, merchant caravans, and monsters like ki-rins and liches kind of detailed out. But the best part was the individual npc descriptions in the very back, making this product special. It had classics like Tenser and Mordenkainen, but for some reason it was Phoebus the lizard man, and Talbot the centaur that intrigued me. They had similiar stories in that they'd each died and due to lack of ressurection availability were instead reincarnated. Talbot was the most appealing to me because his story was tragic. Whereas Phoebus was able to embrace his lizard-manity, Talbot was lonely and an outsider, unable to hang with the centaurs, but no longer feeling comfortable around humans.

This book is monumental in my memorie and imagination and it was one of the most useful D&D accessories from that period.

Of special note, regarding the art, the cover is strange and compelling as to be expected from the illustrious Erol Otus. But this book has the best (and some of the worst) examples of Jeff Dee's drawings. In particular, next to A Paladin in Hell by the late Sutherland, this is one of the most compelling compositions of a paladin: 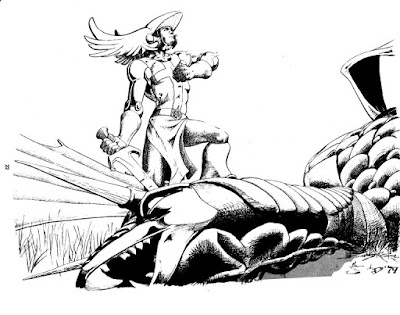 Doesn't it still make you want to play a paladin? Like right now...