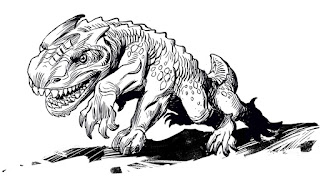 Woola
Calot
Armor Class: 6 [13]
Hit Dice: 6/40hp
Move: 120' (360' burst)
Attacks: bite
Damage: 2d10
No. Appearing: 1
Save: F5
Morale: 12
XP Value: 600
Str: 18 (+3), Dex: 18 (+3), Con: 13 (+1), Wis: 9 (+0), Int: 5 (-1), Chr: 12 (0)
Equipment: n/a
Woola is a calot and the loyal hound of John Carter and his family. Calots are about the size of a Shetland pony, with ten short legs and a frog-like head, and a small amount of bristly "hair". They are the fastest creatures on Mars. He can perform bursts of speed for 2-8 rounds of 360' per round, and requires an hour of rest before performing a burst again.
Woola was once a guard-dog for the Tharks at Korad and was assigned by Sola the green martian because she feared for Carter's safety since Korad was infested with white apes. Carter misunderstood Sola's intent and attempted to run away and was startled to find Woola was faster than him. So he leapt to a second story window, but was grabbed by a white ape. In the struggle he was pinned down by the ape and was about to be smashed by another apes cudgel when Woola intercepted and tore at the massive creature. Carter returned the favor by grabbing the cudgel and smashing the monstrous ape's head in and saving Woola.
Carter showed affection to Woola by petting his head, and never before having experienced kindness Woola became his loyal companion. After John Carter was forced to leave Mars, Woola became Carthoris's pet and later that of his younger sister Tara.