Dragonlance seems nearly forgotten in all the recent 80's nostalgia. The original series called The War of the Lance ran from 1984 to 1987. Exactly the years I was in high school. So I was in the prime demographic for the adventure modules and novels.

Margaret Weiss posted an image on her Facebook and mentioned it was from the Russian Dragonlance Musical. That was immediately intriguing. So after hunting down more information about it I came across the entire play on YouTube. And found several images online. The costumes  are clearly recognizable and not too bad. The set though is very minimal and relies on lighting to hide that fact. 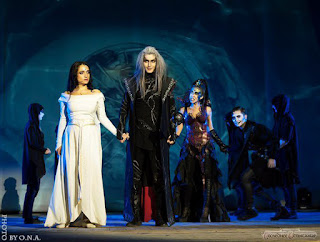 Turns out there are several versions of the musical you can find videos of, each with different actors performing the parts. I didn't do an exhaustive review to see which was the best as I enjoyed the first one I stumbled across well enough. 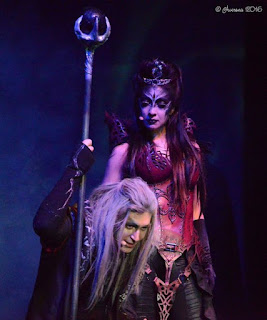 Wizards of the Coast seems to have pretty much forgotten the Dragonlance line and nothing new has really come out since 2010 as far as I can tell. In retrospect the novels aren't necessarily the greatest literature of all time and is highly derivative of Lord of the Rings. At the time the novels were immensely enjoyable, though they come across as a little naive and cliche by today's standards. But I do think the second trilogy, the Time of the Twins is much more original and tells a rip roaring story of a mage and his quest for power. Despite it involving time travel, which is annoying enough especially in a fantasy novel.

Its kind of funny to think that most of the performers probably weren't even born yet when the books came out. That makes me feel old.

The musical is interesting, a Netflix series with high production values would be even better. You can watch the entire musical with subtitles on YouTube. It's not that bad and has some really good moments if you don't mind opera: