This is an update to current projects in development.

First is my major ongoing Norse Mythology project, currently being called the Book of Valkyries. It has several components to it including a bestiary and maps. The text is largely written, now I am focusing on the artwork and layout. I provide regular in depth updates on my Patreon as well as exclusive content. On the current trajectory it looks like there will be an OSR version, a 5e version, and a literary (non-gaming) version.

Second is a supplement for Warriors of the Red Planet. A Princess of Mars adventure is a translation of the classic pulp novel into an OSR rpg adventure. A design diary of sorts is posted here and on the ODD74 board. Large parts have been written, I am currently working on the maps which are a fun challenge.

Third is the fantasy world of Hawkmoor. This grew out of the flavor text of the Beasties books, and a homebrew campaign I've played off and on now for years. It is a self contained OSR RPG that is also my take on original white box DnD with streamlined rules, better organization, layout, and art. Patrons also get updates and bonus content.

If there are other projects you've heard mentioned here that aren't listed it isn't because they've been forgotten. I am using a technique I learned about from a talk by Warren Buffett called the 5/25 strategy. Where you list 25 things you want to accomplish, choose 5 to focus on. The other 20 are things you must avoid spending time or energy on at all costs, so they do not distract from the 5. As you complete the 5 you can consider adding those (or others) to your current 5 priorities.

So these 3 things (and 2 other personal goals) are my current priority.

It doesn't mean there won't be occasional odds & ends posted here, or made available on DriveThru. I have many interesting tidbits to release here and there. The hard part for me is my head is always exploding with ideas most of them not good or worth wasting time on, but once in a while there is a good one. Like last night I couldn't sleep because my brain was churning through some concept for a grimdark fantasy setting so I had to get up and write it down to get it out of my head and onto paper, because it will become one of those projects I need to avoid. For now.

Thanks for checking this out. Stay tuned for more. 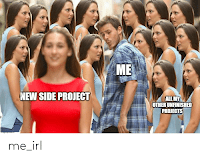