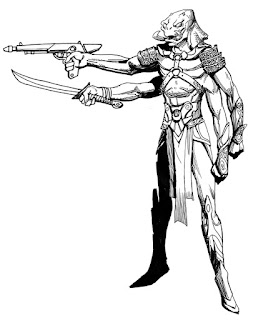 
Bar Comas had much the better of the battle, as he was stronger, quicker, and more intelligent. It soon seemed that the encounter was done, saving only the final death thrust, when Bar Comas slipped in breaking away from a clinch. It was the one little opening that Dak Kova needed, and hurling himself at the body of his adversary he buried his single mighty tusk in Bar Comas's groin and with a last powerful effort ripped the young jeddak wide open the full length of his body, the great tusk finally wedging in the bones of bar Comas's jaw. Victor and vanquished rolled limp and lifeless upon the moss, a huge mass of torn and bloody flesh.
- A Princess of Mars, Chapter 18, Chained in Warhoon