One of the city ruins the green martians take John Carter to is Korad.


Korad is a dead Martian city that was once belonged one of Barsoom's greatest nations. It was a center of culture and commerce, built upon a natural harbor surrounded by magnificent hills. When the seas began to dry Korad was abandoned, and as happened to many of the abandoned cities, it was soon taken over by one of the green hordes, in this case, the Tharks. As it is with most dead cities upon Mars it had a population of White Apes.
Bordering its central plaza is a magnificent structure of marble inlaid with gold and brilliant stones, with a canopied entrance one hundred feet in width. Its inner walls decorated with wondrous murals, paintings, and mosaics showcasing scenes of ancient Barsoom.

On my live stream twitch.tv/thomasdenmark I did this painting of Korad. It's still pretty rough and could use a lot more refinements. But it is a start. 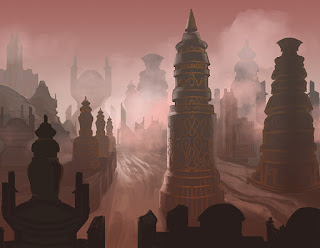 I live stream weeknights at 9pm PST, you are welcome to join and watch me draw and talk about D&D.