Busy week here at the workshop. The edits are completed on Freebooters, just need to have another set of eyeballs double check before I export the PDF and it will be done.
The edit list for Raiders is basically completed, I still need to go through and implement them on the document. It's all been fairly minor stuff like indents and English instead of American spelling on a few things. The HD was left off the Occultist class. Couple of tabs missing on the equipment list. You know, all the little things that seem to never end once you're "done".
I wanted to have them both out this week, but it was way too busy around here. Even had the kids off to their grandparents for the week and I'm still behind on work.
I'll leave you with this classic encounter from Raiders, the Femme Fatale! And an illustration for her that didn't quite make it into the book (another smaller one was used):
Femme Fatale
HD: 1
AC: 6 [14]
Atk: by weapon; often dagger or revolver (1d4 + poison)
Luck: 14
Move: 120’
CL/XP: 1/100
Special: Irresistible, poison vial, communication with the enemy
Dangerous women who rely on their personal charms and alluring beauty to lead male adventurers astray who must make a Luck roll vs. wisdom to not be seduced. Includes exotic foreigners such as the stereotypical Chinese “dragon lady.”  Achingly beautiful but “too good to be true,” the Femme Fatale is often armed with a hidden vial of knockout poison to slip into a drink, or a concealed radio to summon up the people they are secretly working for... 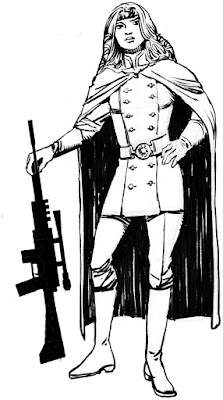