The Savage Sword of Conan! 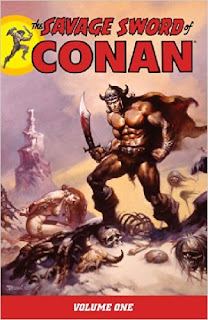 Dark Horse comics has been publishing reprints of the entire run of The Savage Sword of Conan. It is now complete with the publication of #22 (just that book is over 600 pages!). I sporadically collected the original magazines in my youth, and loved them, so it is a special treasure to be able to have the entire collection on my bookshelf!
I minor gripe, the reprints are smaller than the original, and they are printed on cheap newsprint. It would have been preferable to see it reprinted on higher quality whiter paper so the artwork could stand out better. I would gladly pay a few bucks extra for that.

I was thinking of doing a retrospective, as this type of fantasy greatly influenced D&D, and I'm sure many of you collected and were inspired by these barbaric tales.

There were so many great, truly amazing, artists whose work filled the pages of Conan. Where else could you see such impeccable draughtsmanship and fine detailed inking on a monthly basis? Not since the hey day of the golden age of illustration, before color printing became the norm, has there been such a bounty of ink drawings of this caliber being produced and printed without color. Just the raw black & white inks!

In this story Iron Shadows in the Moon master penciler John Buscema is having his drawings being graced with the stunningly skilled Alfredo Alcala, arguably the top, or at least in the top 3 inkers of that era. The result is jaw dropping. 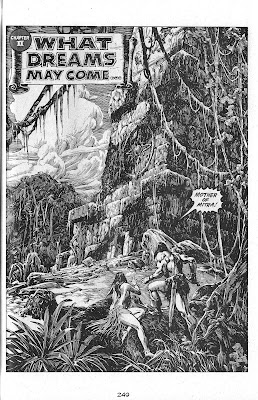 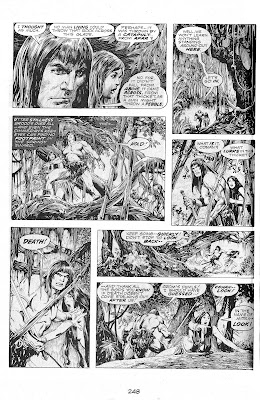 The story itself is ok. It runs in 3 parts. In the first part Conan is the lone survivor of a massacre and he unintentionally saves a slave girl. He actually shows himself to be a bit of a gentlemen - to contrast with the barbarism of the "civilized" slavers. Part 2 delves into some ancient ruins, and there is an encounter with a wizard. The last part they run into pirates and Conan does what he does so well. I won't spoil the ending.

This could very easily be converted into a fun little three part D&D adventure.

I highly recommend this series.