Great heroes need great villains, and Raiders benefits from having some of the most infamous bad guys of all time. Nazis. The philosophy of the Nazi regime led it to seeking out legendary artifacts around the world for the power those objects might contain. This puts them in natural conflict with the protagonists of a Raiders adventure.

Nazi Archeology
Under the patronage of Heinrich Himmler, head of the German SS, the Nazi regime has been actively supporting archeological research whose official goal is to find evidence of ancient Germanic culture across Europe, to promote ideas of pan-Aryan heritage, replace “decadent” Christianity with pure Germanic pagan beliefs, and support the concept of a greater Germanic Reich that extended well beyond the territorial bounds of Germany. Ordinary SS-sponsored archeologists are interested in digging  up any and all relics related to Germanic and Norse paganism across an arc stretching through Germany, Austria, Scandinavia, and north-eastern Europe. Some of the more fanatical Nazis view just about everything through the lens of an Aryan race theory (similar to the idea of an ancient super-civilization archeologists) so powerful artifacts are “obviously” from some ancient white-skinned, blond-haired super-civilization that dominated Atlantis, Lemuria or Mu before falling to some ancient race-struggle, regardless of whether the relics are found in ancient India, Greece, Tibet, or even South America. They are especially interested in stories of ancient cataclysmic god-wars (such as those of Hindu or Norse myth). Some even more extreme Nazi archeologists are also followers of the German folk-beliefs of the “Thule Society” that cast the creation of the world in terms of primal cosmic collisions of great moons of ice; these are often drawn to investigate places like Iceland, Antarctica or the North Pole where evidence of this might exist, and follow-up fantastic theories related to polar entrances to a hollow Earth containing hidden lost worlds. Who knows, in a pulp archeology campaign, they may be onto something... 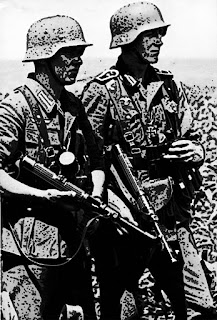 Nazi Soldier
AC: 8 [12]
HD: 1
Atk: weapon – bolt-action rifle
Luck: SF1
Move: 120’
Special: squad may have heavy weapon
A uniformed enlisted soldier. Weaponry consists of a bolt-action rifle and bayonet. Soldiers in tropical or desert climates often wear caps or hats rather than helmets (AC 9 [11]); otherwise a steel helmet is usually worn. Each infantry squad (8-12 men, but in the field often under strength with only half that many!) usually has one man armed with a light machine gun or automatic rifle. One man in a squad may have a submachine gun or an anti-tank rifle. If expecting trouble, soldiers may carry a couple of grenades. Squads are led by a squad leader with 2 HD. Three to four squads will make up a platoon, commanded by a lieutenant (or equivalent) assisted by a platoon sergeant.  Similar stats can be used for organized para-military fascist thugs such as Italian Blackshirts or Nazi Brownshirt “Stormtroopers” (the SA) although they are usually less well disciplined than regulars soldiers.
Soldiers vary in motivation from patriots to fanatics to mercenaries, but most are more interested in fighting for their comrades sake than anything else, and will retreat in good order if badly outmatched. 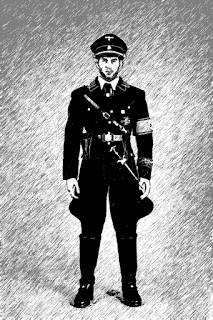 Nazi Waffen SS
AC: 8 [12]
HD: 2-3
Atk: weapon – bolt-action rifle or submachine gun
Luck: SF2-3
Move: 120’
Special: squad may have  heavy weapon
A member of a high-morale unit that has its pick of recruits. Equipped the same way as ordinary soldiers, but with +2 to morale checks, due to fanaticism, and greater HD. Sergeants or officers have 3 HD. They will often fight to the last man. These units will often have carbines, machine pistols, or submachine guns rather than rifles. Some units may still also arm officers or men with swords.