I love astronomy. If I hadn't decided to be an illustrator for a living I would have gone to pilot school to be a helicopter pilot, but my 3rd choice would have been astronomy! So of course the recent incredible breakthroughs in finding exoplanets has me excited. Any time a planet is in the "goldilocks" zone it makes astronomers get all tingly inside. The goldilocks zone is where the distance from its sun makes liquid water possible on a planet.

Gliese 581 is a planet that is in its star's goldilocks zone.


A fascinating thing about Gliese 581 is that it is tidally locked. This means one side always faces it's sun, while the other always faces away. Fire and ice. This struck me as an incredibly compelling planet for a Fantasy World. Imagine if a planet only had a strip, about the width of California, around it's circumference that was habitable. To the north deserts, unquenchable fire, and uninhabitable lands boiling with magma. To the south a frozen desolate wasteland too cold for any life to bear. But, that space in-between a veritable paradise. A perpetual Hawaii in twilight where life thrives.


Of course Star Wars beat me to the punch with Ryloth. But, Ryloth is mild compared to Gliese 581. And I'm talking about a fantasy world with fire dragons and ice dragons, wizards, artifacts, and mighty warriors!
So I took a little time to develop the idea. I don't know how far I'll go with it, but I'm thinking of making this a publishable fantasy campaign world for use with the Original Edition (and as my previous post indicated, any edition from 0 to 3.5).


Andraxis the bold used a particularly powerful Ethereal spell and flew high above the clouds, higher than any mortal had dared to before, after returning he created this detailed map of what his astonished eyes saw. To the north (left) the world was bathed in fire and blinding light. To the south (right) the world sank into darkness and cold. In the middle the mighty domains of man, elf, and dwarf could be seen bathed in verdant green. Andraxis took months to recover from the ordeal, and swore to never venture so far into the heavens lest he incur the wrath of the immortals. But the sights he saw and recorded has benefitted all the sentient races. 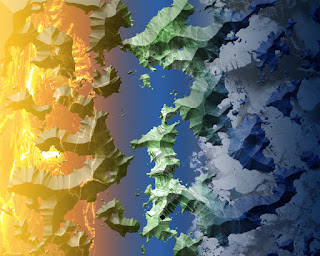 Gondalfar, the world famous cartographer gives us his detailed contour of the world. He drew heavily on the works of Andraxis, and on his own world famous explorations to create the standard map used by the Imperium: 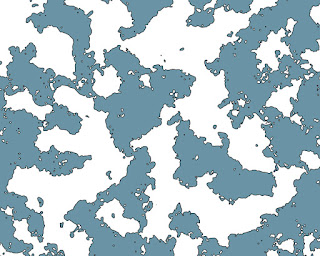 Gondalfar's map looks uniformly peaceful, but it is well known that fire breathing dragons, evil Efreet & salamanders, and intolerant fire elementals dominate the lands to the north. While to the south snow dragons, frost wyrms, and ice devils rule the lands.