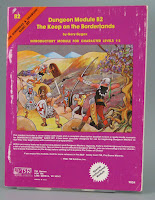 This blog tends to focus a lot on the art of old school RPG's. With the passing of Jim Roslof I really am at a loss of words. The impact of his art direction has had a deep and lasting effect on my own art and the art of many successful fantasy illustrators today. It is relatively easy to focus on his art, but one of the most important things he did was hire amazing artists to illustrate the world of Dungeons &; Dragons.
He was in charge of the art department at TSR during its most important formative years and he was largely responsible for hiring Larry Elmore, Clyde Caldwell, Jeff Easley, Keith Parkinson, Tim Truman, Fred Fields, Brom, and others. These artists went on to not only define what James Maliszewski defines as the "silver age" of RPG's, but a whole generation of fantasy artists. A field of illustration that is still going strong. These artists influenced my own artistic direction. If you do an internet search of any of these artists you'll soon see the impact he had on imaginative fantasy art to this day.
He was criticized for his decision to hire Keith Parkinson, but Keith went on to have a fabulously successful career and influenced a generation of artists.
It took years for me to understand the influence Jim Roslof had on my career and the career of many artists working today. I will be forever indebted. Thanks Jim, and God bless your family!