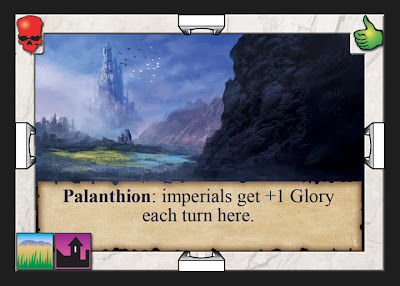 Palanthion is the capitol of Dolmaranthuz - the most powerful empire in Tarniss. It boasts the tallest castle-palace in the world, home to emperor Kaelus the great. If you are a citizen of Dolmaranthuz, an "imperial", you are afforded special privileges that no foreigners get - access to the socialized system of the empire.

You may notice some subtle changes to the map card layout. I think it adds to the legibility of the map cards, and makes the game better. (the final Peril/Glory value of the card hasn't been settled yet, so I've left that off. Playtesting, playtesting...this game needs to be awesome).