What if Armor wasn't represented by a number, but by a code? To some degree that was the original intent of Armor Class.

Page 38 of the 1st edition AD&D Player's Handbook has an interesting artifact left over from Chainmail that is the Weapon Types and "To Hit" adjustments system. I don't recall ever actually using this in play as it is too cumbersome and didn't seem worth the complication for whatever game play it is supposed to add. Today we think of Armor Class (AC) as an ascending (or descending) number representing improved defense against weapons, and that is true to an extent. More specifically AC represented a specific type of armor which some weapons were better or worse against as shown on the Weapon Types table.

Here is a cleaned up version of that table: 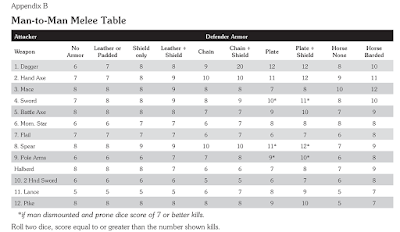 Taking notes from that idea here is a further extrapolation of the concept, grouping weapons into classes by their similarity called a Weapon Class. So the number does not represent offensive or defensive strength so much as a short hand or code for the weapon/armor it stands for. They could just as well be called A, B, C instead of 1, 2, 3.

I discuss this idea on the OD&D forum here: https://odd74.proboards.com/thread/14226/weapon-class.