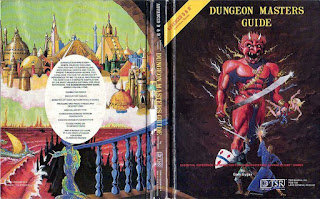 One of the items on my "would be fun to do someday" list is re-imagining the original ADnD covers in a modern style, but not too modern. When doing fan art or re-envisioning something a few questions come up. How far can you push it? What has to remain the same?

I've collected some references and done some sketches to answer these questions. I don't know if I'll go through with this and actually do full fledged paintings, but I might. One of the first things I sketched were the characters on the DMG and how they would look from the front. I've done a lot of character designs over the years in video games and in tabletop so I took the same approach to these designs. This first attempt is pretty safe and quite conservative with the characters. Not really changing anything. As I was doing this it occurred to me that it is not clear what the girl's character class is. Is she a thief? Or a magic-user? She seems to be holding her hand in a gesture to cast a spell, and a dagger isn't out of place for either class. I think I'm going to go with magic-user, though I suppose making her a thief would round out the party better. 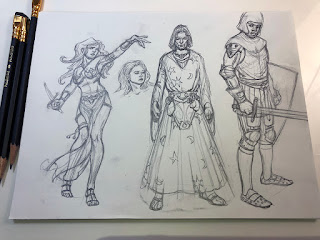 The efreeti as cool as it is, has some opportunities for some really fascinating designs. Especially in the jewelry and its face. 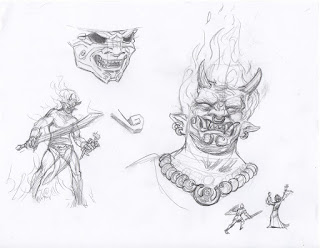 Probably the most interesting part of this would be creating the city of brass floating over a burning ocean of oil. That could be made to look exceptionally brilliant. I haven't done any sketches for that part yet, but I am thinking how the front and back could be better integrated in a wrap around cover.