I keep a Vision Map as my desktop background of mock covers for books I'd like to make. I recently updated it with a schedule for one book per month for 2018.
To produce one book a month is my goal anyways. That was my goal each year for the past few years, but I haven't quite been able to hit that rate. Maybe this will be the year! 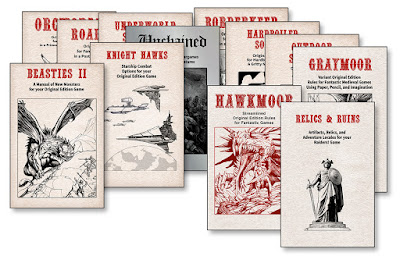 Beasties II is the first book I hope to get out at the end of this month. You've seen a lot of the Beastie of the Week posts here, those will be compiled, cleaned up, and several new unseen creatures and characters added. Also some useful random generation tables in the back.

Knight Hawks is the followup to Colonial Troopers. It adds in depth space combat to the basic rules of the core book. This book can be used with any game compatible with the original edition, with some tweaks. It will also have a catalogue of planets and encounters to add adventure locales to experience.

Relics & Ruins is the first supplement for Raiders! and will have, as the name implies, lots of relics for your archaeologists to search for as well as ancient ruins to explore.

Hawkmoor is the high fantasy world I've been hinting at on occasion. I'll have a more in depth reveal of what it is about, but in short it is a simplified and streamlined original edition inspired game system and a high fantasy world that is more than just a sandbox. This book is a supplement to the main game.

Graymoor is a what-could-have-been exploration of the original edition game system that takes things into a different direction. The game will be familiar, in some ways its a little like Unearthed Arcana except that it is a complete core book. If you want a taste of what it is like check out this post about Gygaxian Systemization I made way back in 2010.

Other Books
Some of the other books you get a tiny peak of in the image above are a Chainmail homage, a few more world settings in unique genres that haven't been overly explored in the OSR (as far as I know), and some useful game supplements that flesh out some classic adventure environments that can be dropped into just about any fantasy campaign.

Left over 2017 Projects
These are some books that are pretty far along I've worked on, but didn't quite finish. First a version of Warriors of the Red Planet in the Basic Edition style. The other is a mini-campaign setting that uses the Colonial Troopers rules, it is based on an adventure I used to run at conventions so it's been fairly well play tested, the hold up is converting the stats to Colonial Troopers and making art. 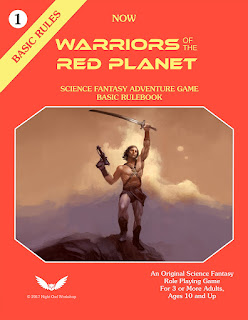 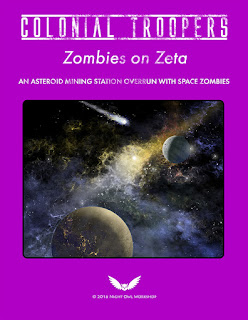 If any of these look interesting to you, or if you have suggestions for a book I should make let me know in the comments section below. Cheers.