Beastie of the Week: Vulture Harpy

I managed to draw a Beastie of the week just before the weekend, and a first draft of stats which I think could work very well as a slightly amped up version of the regular harpy. 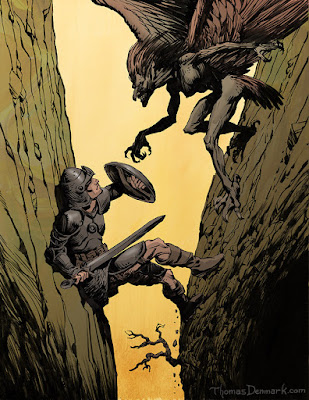 The vulture harpy is a much fiercer, tougher cousin to the common harpy. From a distance they appear very similar, but up close their fearsome countenance and unholy gaze is unmistakable. They let out a blood curdling screech as they attack their prey. This screech causes terror, make a saving throw or be at -1 to all attack and save rolls for 2d8 rounds.

Vulture harpies have the upper torso of a human female, but their face, lower body, and wings have the sickening appearance of a vulture.  Like the common harpy their song is a charm that draws its victims to the harpy (saving throw applies), and the harpy’s touch casts the equivalent of a charm person spell (again, saving throw applies).