Beastie of the Week: Undead Giraffe 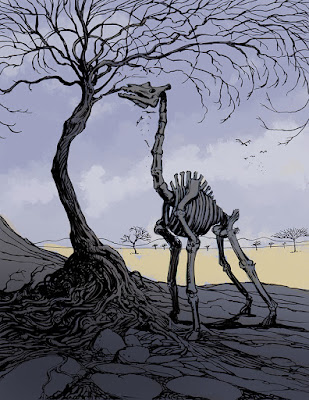 Seeing an undead giraffe scrounging for food it cannot even digest and enjoy causes the viewer to experience extreme sadness. Save or lose motivation to do anything for the next 2-7 hours. Failed save will result in moping about, wandering aimlessly, and an unwillingness to engage in activity other than weeping.

When a giraffe is slain as a trophy by a cowardly hunter using unnatural means such as a magic weapon or spell there is a 1 on 20 chance that the giraffe's soul will not depart. In these cases a corrupt cleric can use a raise the dead spell which will not restore the giraffe but instead creates an undead.

Can be turned by a cleric as a ghast.

An undead giraffe tries to satiate its unbearable hunger by feeding on the dry limbs of a dead tree, if there are no dead trees then it will feed on any living creature it can catch.

There is a cursed pocket dimension called Gloom where undead creatures are cursed to roam, seeking for those things that brought them happiness in life. They exist forever unsatisfied in this barren wasteland. The plains of this haunted realm has many undead giraffe wandering its savanna.