Deadlands is one of my favorite RPG's of all time. I haven't gotten to play it as much as I like, but I have enjoyed reading the books. The wild west is far enough in the past now that it is mythologized, and the idea of introducing fantasy tropes, like magic, monsters, and undead, kind of works. One of the project ideas I'd been batting around in my head was a fantasy frontier western setting, sort of Tolkienizing the old west with fantasy races, creatures, and magic. It was tentatively called Lords of the West, with despotic warlords controlling regions, and various factions vying for precious resources.

Then I saw Ryan Pancoast was developing a much more interesting version of the idea. He's written and illustrated a book that looks fantastic called Common Ground: A Frontier Fantasy Story. I've backed it on Kickstarter, and if it looks cool to you, you should to. 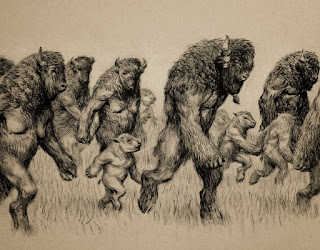