I was just accepted to the Gen Con art show for 2017! I went to Gen Con last year as a guest of Goodman Games and had a blast working with the guys at their booth. The art show last year was so good I was blown away. It's a juried show which means they choose between all the submissions of artists who want to be in the show. I'm honored to be part of the show this year.

Also I acquired a table at Sacramento Wizard World comic convention which takes place on June 16th. I went there last year for the first time and it went very well. I'll have a lot of new and exciting things in time for that show so it should be a good one.

Something I have been working on with my convention appearances is appealing to the difference in comic cons and gaming cons and what the attendees want. While they are both "geek" culture and there is a lot of overlap, art sells really well at comic cons whereas my RPG books and games do well at gaming conventions.

A "no brainer" right?

Well it wasn't always so clear in my thinking because I'd always go as "Thomas Denmark the Artist" and by the way I have these gaming books. My booth would be a hodgepodge of my work. Now I go to gaming conventions in the guise of Night Owl Workshop with all my gaming books and material, and I don't bring much art. When I go to comic cons I only bring a few of my recent gaming material, but mostly it is about the art I do for publishers and personal work. This has really helped to make the conventions more successful.

The exception to this is Gen Con, since I'll be in the art show I'll be presenting my booth as primarily an artist's booth. I will have some of my new RPG books though (which is allowed under the rules of the show).

Thanks for reading all that, here's a little treat. An Eladrin Swordmage I drew for Wizards of the Coast. (I know it's 4th edition D&D, but they commissioned me for a lot of art during that era. I should make a post how I'm starting to appreciate 4e a little more...) 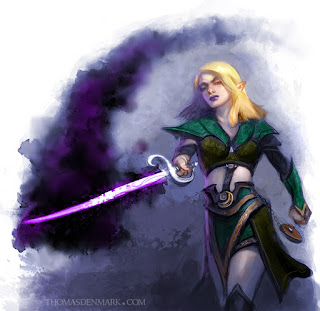