Beastie of the Week: Imprisoned Fiend 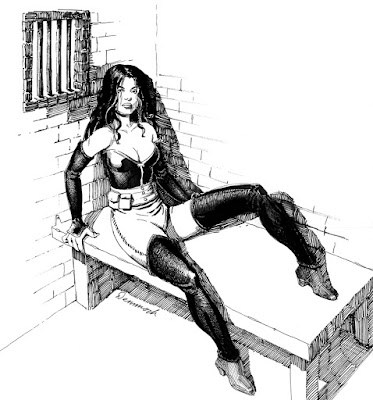 An imprisoned fiend appears as a very attractive female or male. They will hide out in dungeons, in locked rooms behind bars and will pretend to be a prisoner. They will plead to be set free, promising anything they think their potential savior may want like wealth, powerful magic, sex, or prestige.

Once freed they will be enthusiastically grateful, promising to provide the reward as soon as they are able. When possible they will be kind and helpful, though never going too far out of their way to aid. The fiend also will never attack except in self defense. They will never actively do anything untoward, negative, or that harms the party they are with. But...

An imprisoned fiend emits an aura that gives +1 to all saves, +1 to hit, and +1 armor class to opponents of the party they have attached to within a 50' radius.

When killed the imprisoned fiend bursts in a shower of sulphuric dust and a mocking hollow laughter fills the air. Everyone within hearing range must save or take 1d4 points of damage and start bleeding from the ears, losing all hearing for 2d12 hours.