Beastie of the Week: Koblin 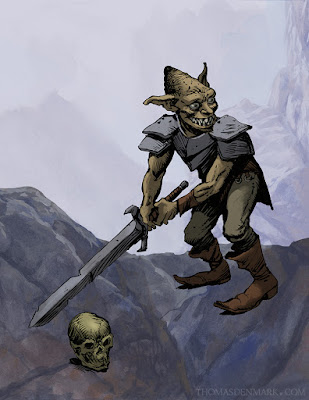 Koblins are the offspring of a kobold and a goblin, and due to a strange genetic anomaly are greater than either of their parents. They will often grow up to rule the clan they are born into, unless they are thrown out at an early age which happens more often than not.

Even though they are very light sensative they do not suffer a penalty to hit in sunlight like their parents do.

Koblins are smallish creatures measuring around 5ft tall that inhabit dark woods, underground caverns, and the otherworldly realms of the fey. They have a thirst for battle and have the ability to encourage a troop of kobolds or goblins to increased fierceness in battle which endows a +1 to hit. Kobolds and goblins will also be of increased courage, rarely falling back or surrendering.

A koblin’s lifespan is often two or three times that of a normal kobold or goblin. Due to this they are often revered as demigods after the generation they were born into passes away.