Warriors of the Red Planet continues to gather momentum. Since it has been available on Lulu.com a lot of copies have been getting out there and into player's hands. The feedback has been universally positive, many are surprised that we're calling it a "beta" when it is more polished than much of the stuff that's being published out there.

I'm working on a few things in general, like fixing typos, making illustrations, and collecting feedback on where things need to be clarified and improved. This work cannot be done without your help, so please chime in on anything you've noticed that we can make better.

Specific things I am working on are a map and world guide of Barsoom, and an introductory adventure. I've chronicled the challenges of making a map of Barsoom here a few times, the biggest hurdle being that no two sources agree on locations of places according to the books. Every map I've looked at has contradictory information. So I'm distilling the best sources I can, and letting intuition be my guide to fleshing it out.

The world guide itself is just a matter of how much detail to go into, and how much additional material to make up for the sake of creating fun adventure locations and possibilities. This has been one of the most enjoyable parts of this endeavor. I'm looking forward to sharing more of that here. Also it is restricted to the first five books which are in public domain. But that is more than enough information for a world filled with adventure potential.

The adventure I have been writing, The Lost Vault of K'Ral, has gone through playtests and revisions (how many adventures actually get playtested?). I'm detailing out the various locations with essential information without getting too wordy. And of course making some very cool maps and illustrations.

Ok, that's a pretty good update for now. Here is a little sneak peek of one of the maps in The Lost Vault of K'Ral: 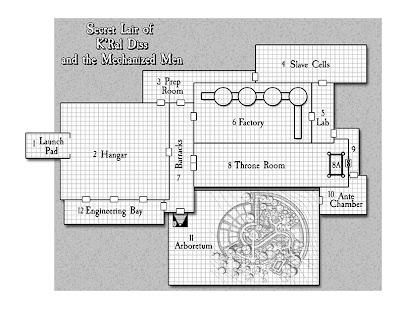