Catacomb Saints are skeletons of Christian martyrs buried under Rome that were unearthed back in 1578. They were distributed throughout Europe, mostly in Germany and used to replace the relics that had been destroyed during the Protestant Reformation. Yes, Catacomb Saints are a real thing. 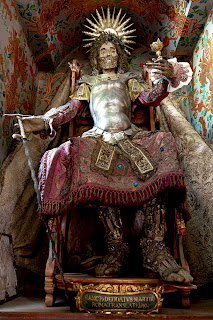 There is no shortage of evil aligned undead horrors to be found in DnD, but the good aligned ones are few and far between. Here are the stats of a Catacomb Saint in Swords & Wizardry terms, that could just as easily be converted to any non-4th edition version. In 1st edition or higher they will be of any Good alignment depending on the deity they serve (they will only serve Good-aligned deities).

HD 7; AC 1[18]; Atk 1 smite (1d8); Move 12"; Save 8; CL/XP 11/1600; Special: Magic or silver to hit; magic resistance 51%; Call of Life; Immune to enchantments, sleep, charm; Cure Disease by touch, continual Turn Undead as 11th level cleric.
Catacomb Saints are often sent on missions to aid the cause of their deity. Sometimes this is to protect a group of adventurers, other times this might be to repel an undead horde, or to help a small town in need. They appear as ornately dressed skeletons, jewel encrusted, in rich robes with gems for eyes. They will have between 20-200gp worth of jewels on them. Anyone who attempts to steal the jewels from a Catacomb Saint will incur the wrath of their deity.
Call of Life: once per day a Catacomb Saint can call a deceased person's spirit back to its body, if the person has been deceased for less than 3 days. This person will be shaken and disoriented, but restored to full hit points.
Cure Disease: touching a Catacomb Saint instantly cures any disease the afflicted may have.
Catacomb Saints are immune to enchantments, sleep and charm spells.
Catacomb Saints exist to serve their deity. They are only servants of a Lawful aligned deity. Other Undead will avoid the presence of a Catacomb Saint, treat as continual Turn Undead by an 11th level cleric.