Since the early 80's Endless Quest books have been helping DnD fans get their DnD fix when they've got no one to play with. 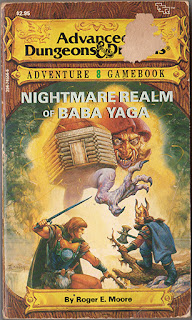 Last week I alluded to this book in my post about Interstellar, Baba Yaga, and Tesseracts. This is the first Endless Quest book I read that you actually have to play it like a game with dice and a character. The only reason I got this book was that I enjoyed the adventure as it was described in Dragon #83. But it turns out this book is actually based off the 2nd edition AD&D adventure The Dancing Hut of Baba Yaga.

The character sheet is really pretty clever, it does double duty as a bookmark. The character, Jerrak the bland, is a plain vanilla fighter.

Your companion in the game is Mjolnir. Mjolnir the dwarf? Seriously. I never did get over being annoyed by that name each time I read it. That was one of the few negative marks I'd give the book.

Unlink previous Endless Quest books I've read, you don't just choose your path, you often have to roll to determine results. The system has very little to do with AD&D. I think I would have preferred if it stuck closer to AD&D, rather than some new system that really isn't any more clever or better suited for the genre.

Overall the writing is fine, and the adventure quite enjoyable. It rates on the higher end of the Endless Quest books. Though I'd say it errors on the easy side, I've yet to get killed or even close to 0 HP, and have beaten the adventure each time. The author Roger E. Moore was probably my favorite Dragon magazine editor (or a close tie with Kim Mohan), and I've really enjoyed some of his other stories I've read. Particularly "A stone's throw away" a short story in Dragon magazine featuring Tasslehoff Burrfoot and Demogorgon, which was my introduction to the Dragonlance universe (also reprinted in The Magic of Krynn).