"My name is swarm for we are innumerable."
Ok, that's a paraphrase of one of the creepiest quotes in the bible, and a fitting description of the locust gods. The original idea was for massive megadungeons, each the size of the great pyramid of Giza, that could fly and land in places they wanted to suck dry of resources. Terrifying citadels of doom. As the concept was developed the question came up of who made these things? This led to the development of evil gods who were locust like in their mentality. I'm not sure, but I don't recall if any deities have been designed before that were actually composite beings made up of multiple intelligences who all formed a singular creature-thing. Here follows a description in OD&D style: 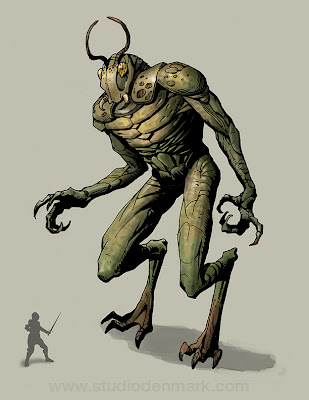 Locust God, God of Swarms
AC: 20
Move: 15/24
Hit Points: 290
Magic Ability: 3rd
Fighter Ability: 18th
Psionic Ability: Class 3
Each locust god appears as a giant humanoid locust. They all share the same mind, though they are not exactly telepathic. It is more that they all make the same decisions. Each locust god is unique, it has its own subtle differences: irregularities, body markings and shapes. It is not known how many locust gods exist.
Each locust god has a flying citadel as it's throne. Each citadel has multiple levels and are populated by malignant creatures of all sorts. The citadels also contain untold riches. Once the locust god that rules a particular citadel is killed that citadel can no longer fly. It eventually decays, only an empty husk may remain, sometimes for centuries.
Clerics of a locust god gain the ability: summon locust swarm, once per day. A locust swarm does not inflict damage, but obscures vision in a 10' radius causing -1 to hit, and limiting the ability to cast spells for 2-5 (1d4+1) rounds.