Shortly after discovering D&D in Jr. High sometime around 1980 while living in Marana Arizona, my parents moved to Reno Nevada. This was a period where I had no one I knew who played. All I had where a basic set, a few modules, the DMG, PHB, Deities & Demigods, and Fiend Folio (it was sometime before I finally got the Monster Manual). So I took to using the solo rules in the DMG - and found them basically unplayable. AD&D was just too complex a beast to boil down to a few random tables. So I took to making my own simpler version called Soldier of Adventure! 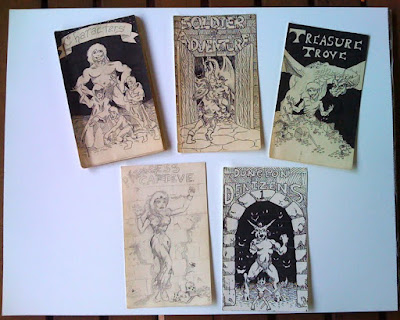 There were 5 hand typed booklets on 3"x5" cards, with plans for an additional 10 booklets!

Yeah, the art was terrible. I hadn't learned anything about anatomy or composition yet, and didn't have anything to go by other than the art in the D&D books (I'd seen a Frazetta book once, and I may have had a Boris Vallejo book). Rest assured, as bad as the art was, the writing was even worse!

This rules lite "RPG" was an auto-adventure generating game. Characters were based on classes and levels. Advancement was your tried and true XP system for killing stuff and taking its gold. It was all firmly rooted in old school gaming.

The interesting part of this is that Soldier of Adventure, after many, many iterations finally ended up as the game Dungeoneer published by Atlas Games. I've often considered polishing up the last version, before it became a card game, into a bona fide RPG.