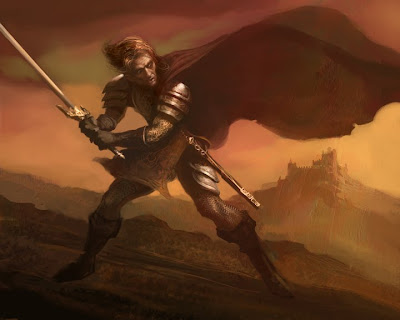 You are a combat specialist. With weapon in hand you are a terrible force of nature cutting through opponents like a farmer harvesting wheat.

You show great vigor, courage, and competence in battle. You are the first line of defense in your party. You can deal out immense damage and absorb wounds that would kill an ordinary man. You protect the weaker members of the party, giving wizards time to cast their spells, afford paladins enough time to call on their gods, and provide cover for the scouts to do their handiwork.

While your melee aptitude is second to none, you are inexperienced in the forces of magic and have the least magic ability of all classes. But you more than make up for this lack of mystical knowledge with your powerful sword arm and raging bloodlust. As you gain experience the other party members will learn powerful spells and gain various strange special abilities, but you will only get better at fighting. You will deal more damage, aim more accurately, and hit more foes than anyone else.

Melee aptitude: pay any # of Glory, add this # to your next Melee attack.
Rapid strike: on a Melee hit you inflict 2 wounds, and hit in the case of a tie.
War cry: you and your allies gain +2 Melee for the duration of this encounter. This ability may be used once per encounter and uses 1 Melee attack.
Stronghold: you establish a stronghold to begin ruling your kingdom from, gathering peasants and warriors to your banner.

Hope this provides some idea of what a character class write up will look like in the Dungeoneer RPG. Wonder if anyone can guess what the mysterious acronyms QP is?

I know it must seem like I've abandoned this project, but I assure you it is still in development. There have been some major impediments I'll write about some day.