I can't get enough of Burroughs' Mars. I've been enjoying the books even more now than as an adolescent. I've been on an out of control John Carter of Mars collecting spree. Comic books, novels, art, board games, old RPG's...

My most recent acquisition is this little gem: 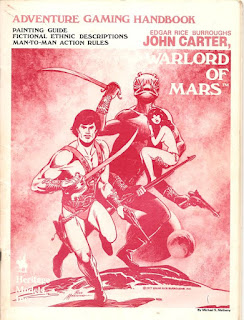 Is this book called Adventure Gaming Handbook? Not a particularly good name. Perhaps it's Edgar Rice Burroughs' John Carter and the subtitle is Warlord of Mars? The graphic design doesn't really clarify the situation. Anyway, this has been an intriguing read. The writer could not decide if he wanted to be serious or silly. Heritage Models Inc. actually got permission to make this pseudo RPG, Unlike the ill fated Warriors of Mars by TSR.

The first half is a sort of light encyclopedia of Burroughs' Mars, while the last half has stats and mechanics for a light wargame that kinda sorta wants to be an RPG. It encourages a style of gaming (later labeled "troupe" play by Jonathon Tweet in his seminal Ars Magica RPG) where you play multiple characters. These rules have some real gems amidst this crude RPG published in 1978. One laugh-out-loud feature is your character's "Princess Points". The game assumes you are playing a red-blooded warrior on the make for a beautiful princess, so this is one of your core stats.

"The fateful, or fatal moment has arrive. You have met the Princess, you have turned on the charm, maybe you have fallen into a fountain or out of a chair, but whatever happened, this is it. It is time to see what she thinks of you. Hold your breath. You gaze into her eyes; you lay your sword at her feet...you wait." 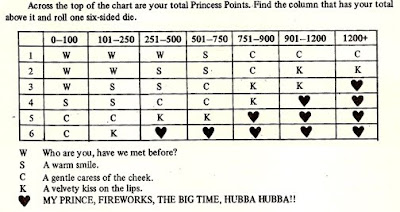 It appears the desired result is "HUBBA HUBBA!!!"

So with this renewed passion for Burroughs' thrilling Sword and Planet tales I've found myself drawing lots of John Carter inspired art lately.

The best news is I've found a partner to make an old-school Mars RPG with, someone whose work I admire and that inspires me. So expect a lot of Mars art to be posted over the next couple of months...