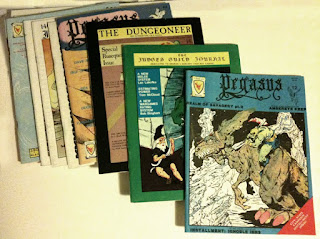 Sometime around 1981 I would go to a very interesting bookstore in Tucson AZ (wish I could recall the name) that had a small section of RPG related material. Most of it was quite arcane to me, what I was really looking for were those neat hardbound D&D books I'd seen the other kids have. Little did I understand what The Judges Guild was all about.

Fast forward to the release of D&D 3. I had left gaming for a period roughly between 1987 to 2000 - the prime years of 2nd edition. Left is too strong a word. I actually played a lot of 1st edition D&D and also GURPS in this time. It seems D&D 3 brought a lot of old gamers home who had left during the 2nd edition era (and I believe 4th edition is completing their journey pushing many to the OSR). Well, this homecoming seems to have revitalized Judges Guild. I noticed at Gen Con one year their booth and they had stacks of these really old magazines: The Dungeoneer, The Judges Guild Journal, and Pegasus.

I have since made a point of picking up any copy I see at game stores, or flea markets at gaming conventions, or occasionally on eBay. I can't get enough. They are like fascinating museum peices, preserving the way the gaming community thought and played the game caught in amber. But they are also full of really cool freewheeling ideas. There seemed to be no boundaries. Everything from articles by evangelical Christians defending their enjoyment of the game to a dungeon crawl based on the Tower of Babel. How to handle the 5 senses in D&D to a treasure column called "All That Glitters..." with such cool magic items as The Dearth Sword which absorbs knowledge of spells from its victims and transfers them to its weilder, and The Horn of Battlesongs (usable by Valkyrie and Berserker classes!) which improves morale of allies.

What I love about The Dungeoneer, The Judges Guild Journal, and Pegasus magazines is their "text dump" feel - no frills here, homemade art (the aroma of fan participation), and cheap newsprint. And best of all the page after page of no holds barred creative ideas. It contrasts so much from the order TSR was trying to impose on D&D at the time.