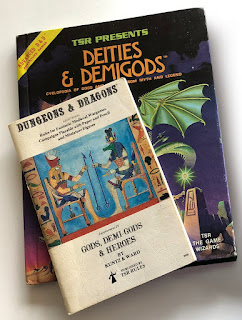 AD&D Deities and Demigods inherits the same problems the original Gods Demigods & Heroes had, namely poor scholarship. In an amateur publication that is to be expected, it was just some guys in a garage making game books for fun after all. However, by the time we get to the AD&D D&DG TSR was making bucketloads of money and could have afforded to hire knowledgable writers and researchers to lay the groundwork for a better researched tome of myths and legends. The reason this is important is that those AD&D books had an outsized influence on school aged children, many of whom this would have been their first exposure to these world mythologies. I know this is the case for me, though I also had a great copy of Bullfinch's Greek Mythology, and I read the Edda's which filled me with a life long love for my favorite myths; the legends of the Norse. Still, many of the false notions in D&DG cluttered my head for years. For example that Loki is a god of mischief, strife, and fire.

My second criticism is that it isn't D&Dified enough. This may seem to contradict my first point, because by making it more D&D-like that will necessarily stray from the historical record. D&D is after all a game, so the material should be very gameable, should be useful for the DM to make a campaign based on the chosen mythology or I'd even suggest all of them together in a sort of Mythic Earth gonzo campaign. The real world is the best campaign setting after all.

To reconcile these two points here is what I mean: a solid foundation of reliable scholarship, on top of that the things that will make for a fun game. For example there are hundreds of Valkyries, most of them nothing more than a name, but each one could be fleshed out with game stats, special abilities, and items that are simpatico with their historical counterparts. As long as what is added doesn't contradict what is known, and is complimentary. A Valkyrie of Storms (there is one, her name is Kara) could be given special abilities that let her influence storms for example. Maybe a spear that transforms into lightning.

Part of the reason for the poor scholarship is that the book tries to cover too much. Two non-scholars with a tight deadline weren't going to be able to give each chapter enough depth. Each mythos deserved its own book really. With space to describe the cosmology, world view, gods and heroes of each legend.

I bring this up because it has long bothered me, and it had a direct adverse affect, in as much as misunderstanding who Loki really was can be of any importance. I mean Marvel comics has done more to misinform millions about Norse mythology than any D&D books did. If you want to quibble about it Jack Kirby, Stan Lee, and especially Walt Simonson really knew Norse mythology well, they were just adapting it to the quirks of the Marvel universe. Still, there was no reason for the D&DG not to have been more reasonably accurate.

What am I doing about it? Glad you asked. For a couple years now I've been developing an art book featuring Norse mythology. It started out small (like so many of my projects) and grew in size as I did more research and understood the material more (like so many of my projects). It came time to start actually producing something. I did have a little sketchbook on creatures from Norse mythology that sold well, and part of that is going to become a larger bestiary book with more refined illustrations. The main element of the project is the Book of Valkyries a collection of art and essays on, you guessed it, Valkyries. As I've been working on that I have a pile of sketches and drawings that would make perfect illustrations for an OSR book. With that in mind I've been writing up stats for each Valkyrie to go with the drawings. Expect to see regular posts to highlight that work. Here is an example: 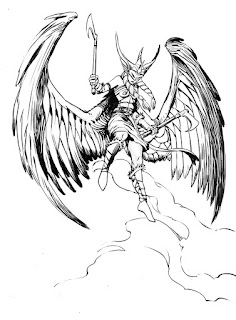 In battle she bears two finely crafted axes thrumuskot (thunderclap) and landvinninga (conquest), that she cannot be deprived of,  if parted from here they will always call to her no matter where they are in the nine realms.

I don't have a set date the book will be done, but it is very far along.

This is not a distraction from the Princess of the Red Planet adventure, that is coming together nicely. More design diaries for that coming soon.