Frazetta Friday - A Princess of Mars 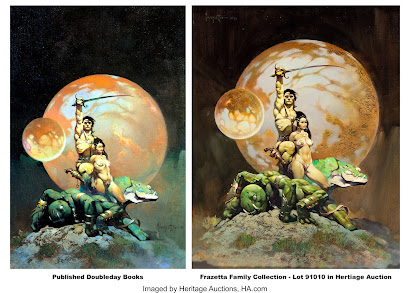 One of Frank Frazetta's most recognizable paintings, A Princess of Mars, came up for auction.

From the Heritage Auctions article:

In 1970, Frank Frazetta painted two versions of the cover for Edgar Rice Burroughs' A Princess of Mars.

One he sent to the publishing house Doubleday, whose hardback version of the 1912 story — featuring the debuts of Confederate soldier John Carter and Martian princess Dejah Thoris — has become one of the most recognizable and influential covers in publishing history. And the other Frazetta made for himself immediately upon competition of the assignment. He was deeply proud of the piece and knew its return was unlikely. Better, he thought, to make another than lose this only child.

Previous auctions have been as high as $5.4 million for Egyptian Queen. No doubt this one too will go into the 7 digits. Here is a link to super hi-rez version (Heritage Auctions account required, it's free to sign up):
https://comics.ha.com/itm/original-comic-art/paintings/frank-frazetta-a-princess-of-mars-painting-original-art-1970-/a/7234-91010.s