From the Tarniss RPG. Describing the Dungeoneer game in classic OSR terms.

The humble 50' rope is an essential item for the aspiring dungeoneer. With this simple tool pits can be traversed, sheer cliffs can be climbed, and dangerous foes can be tied up. So what is a 51' rope?

In ancient times the eldritch lords dabbled in the darkest arts. One humble apprentice of an evil wizard whose heart had not yet been corrupted read through his master's forbidden tomes and tried a simple prestidigitation that would bring life to an inanimate object. He held an old hemp rope and spooled it out as he spoke the words of enchantment, but he fumbled the words a bit at the last moment and accidentally permanently enchanted the rope. This rope was 51' long, and no matter how many times it was cut it would be exactly 51' and the cut pieces would duplicate some of the magical properties of the original. Though its duplicates did not have the unique ability of creating additional copies of themselves, they did retain certain magical properties that protected its owner from traps, and could at times sacrifice itself to prevent a wound. 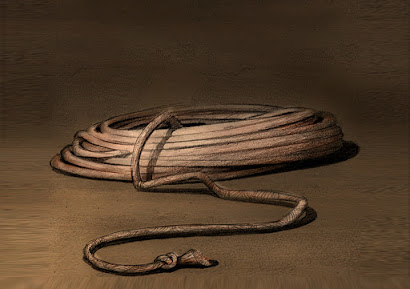 51' Rope
Enchanted Item
This rope provides +2 versus traps and falling in pits. It may be sacrificed to prevent 1 wound from a fall or trap.