This blog has been mighty quiet so far this year. But that is because I have been hard at work creating some interesting OSR material that will soon be published.
With the success of Warriors of the Red Planet I've been working on some other OSR style game settings. The lessons learned from WotRP is don't announce your game too soon! It was a couple years from the announcement until the publication of Warriors, and I don't want to leave everyone hanging again. So here is an update on a few things at work here at Original Edition...

Warriors of the Red Planet
The single biggest request has been for a PDF version. And I'm happy to say that the PDF will soon be available. What was the big hangup? Well, I always wanted a decent map of Barsoom to go with the book and the map in the print edition wasn't quite at the level I wanted. So, I've been working on a better more usable map to include in the PDF edition. Also, there has been an adventure in the works which is being finalized now. It has been playtested several times and is ready for a final editing and layout pass. So The Lost Vault of K'Ral is about ready to publish. This makes Warriors of the Red Planet a much more satisfying book with a Core Rules, a basic Sandbox setting ("Barsoom"), and an adventure.

Now, for the big announcement. I have admired a lot of the books that have come out lately in the tradition of the Original Edition. One of the ones that really caught my eye was White Star by James Spahn. I wanted to do a Star Wars inspired OSR book, but he beat me to the punch! That's okay, because I've been working on another OSR book inspired by the recent spate of amazing comic book movies that have come out recently. Imagine if you will that the original RPG, instead of being Tolkienesque, had been inspired by Silver and Bronze age comics!

Introducing GUARDIANS. A new retro-clone that reimagines the original fantasy RPG as a super-powered game of super heroes and super villains in a modern day setting. The writing is complete, and it is currently in layout with art being added and finishing touches being made. My co-author, David Pulver is a veteran writer of RPG's going all the way back to the classic Marvel Super Heroes by TSR! The final book will be available July 9th by PDF and Print. I will have copies at Gen Con for those attending the show.

Expect previews over the next few weeks to discuss the mechanics and how the richness, complexity, and depth of the superhero genre was boiled down to its essence and simplicity for the Original Edition format. 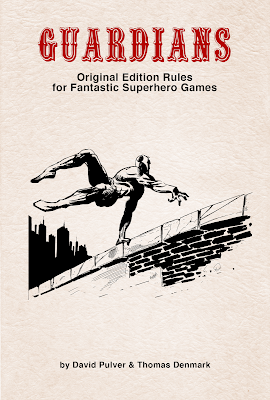