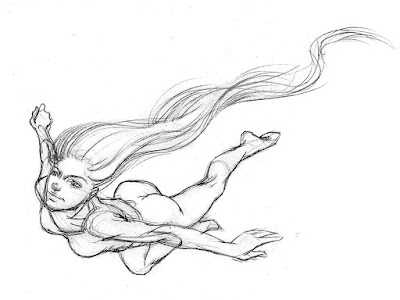 What is more important to a Supers RPG than character creation? The first big question to answer was do we make it a point-buy system or random generation or something else? As development proceeded it became quickly clear that we did not want to do a point system. They too often end up complicated, fiddly, number-crunchy, and cater to the worst aspects of munchkinism. Also, that just wouldn't honor the tradition of the original edition.

So character creation does do random ability generation: straight 3d6, and then your Origins and Class would modify the results. Well, your die results will aid you in choosing the best character type to play.

How to boil down the huge variety of possible supers into a simple class-based system? The solution to this came about surprisingly well, and is part of the system I am happiest with how it came out. First you choose an origin. This can be Human, Exotic, Mutant, Robot, Cyborg, Super Alien, Supernatural, or Superhuman.

The next component to your character is Class. This can be Bruiser, Super-Agent, Power-Weilder, and Gadgeteer. Fighter is included as an NPC class to be used for military, para-military, mooks, or police force units.

I'll get into the Classes in another post. For now I want to focus on what the Origins are. In order to explain the differentiation of various Origins I have to talk briefly about how superpowers are handled. There are Gifts like wealth, a super vehicle, or political authority. Then there are Powers, which are like you'd expect weather control, flight, super strength and so on. I'll get into more details later since there are complications to these in the form of Limits and Issues. That's also for another post.

Human is, you guessed it, a regular human. Like a Dark Detective Gadgeteer or a gun-wielding Vigilante. They do get an extraordinary bonus to stats to represent that they are at the peak of normal human ability at somethings.

Exotic is similar to human in that they are "normal", but they can be a member of an alien or supernatural race. Perhaps they just have blue skin or pointy ears, or lizard skin. Again, like humans they are in the normal range of abilities, but do get a bonus to put them at the peak end of normal. Humans and Exotics are more likely to have Gifts than Powers.

Mutant. It wouldn't be much of a supers RPG without mutants! Would it? Their powers come from their inborn mutant abilities. But they are also feared by the public and so often get bad press.

Cyborgs and Robots are quite similar but are different enough to warrant their own categories. Their powers come from mechanical and/or computer abilities and enhancements.

Super alien. Like John Carter on Mars (the original super!), some aliens have superpowers when they are on Earth.

Supernatural origin. I was hesitant to go too far into mysticism, occult, and magic in Guardians. However, there is a big tradition in comic books to dabble in these as sources of powers so I'd be remiss not to include them. Also, this ties into using other original edition compatible games with Guardians. If you wanted a Sorceror Supreme type you could access the thousands of spells that have been designed and use them in your Guardians superhero game. At any rate this covers demons, angels, gods, witches, vampires and so on.

Superhuman. This is for your classic super that got her powers from a genetically modified arachnid, or a super serum experiment.

I think one of the things that surprised me about co-designing Guardians was how much of the common tropes could be handled in the Origins category, and this allowed for the Classes to be quite simple and streamlined. But, more on that later.

Oh, and here is a great article on the classic Marvel Super Heroes game by TSR.