Countdown to Guardians. In a super powered roleplaying game sometimes hand to hand unarmed combat is an inevitable situation. 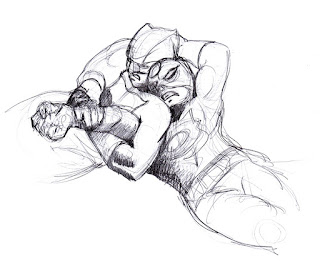 One of the weakness of the original edition, which has been the case of all the editions after is unarmed combat. From its wargaming roots which relied on a certain troop type vs. armored foes grappling and unarmed combat hasn't fit into a simple and intuitive system. There have been multiple attempts, a few of which I'm very fond of like in Dragon magazine #83 which had a very good article by Roger Moore "How to finish fights faster" that went a long ways in improving grappling and unarmed combat.

Within the OSR blogosphere I really liked the grappling rules by Douglas Cole and Peter V. Dell'Orto in The Manor Issue #8. We got permission from them to incorporate their grappling rules into Guardians. As we edited, playtested, and refined the rules what we ended up with were something best described as "inspired by" however we want to give full credit to Douglas and Peter for there excellent unarmed combat rules.

GRAPPLING
Supers often get into wrestling matches. Instead of treating wrestling as an unarmed combat attack that inflicts hit point damage these advanced rules can be used.

A grapple is a melee attack like any other. Roll 1d20, with usual strength Basic Ability Modifier. If you hit, you grappled your opponent. Grappling attacks may be substituted for any appropriate attack one-for-one. Unstoppable (if applicable) may be used.

After hitting simply roll damage . . . but all grappling damage is tallied in “Control Points” (CP), not actual hit points lost. Control Point damage is recovered immediately once the attacker lets go (whether willingly or not), not at the usual healing rate.

Humans and humanoids do 1d6 CP, plus or minus the usual Strength modifier. For monsters, a grappling attack does the same damage as the base attack being used.
The effects suffered when grappled depend on how many CP have been inflicted on you relative to your HP.

After the Grapple
Once you’ve grabbed a foe, you can develop or discard the grapple.
Attacking: You can attack to try to get more CP. Roll to hit normally. If you succeed, roll for CP and add them to the current total. Grappling is cumulative. You can also attack normally with a weapon at no penalty, unless grappled back!

Counter-Grappling: You can always grab a foe back! Attack normally and if you hit, roll for CP: though both the to-hit and damage roll may be penalized due to the grapple on n you! You may apply rolled CP to either put CP on your opponent, or reduce the CP your opponent has on you. If the latter, any excess applies as CP to your opponent.

Let Go: You can always Let Go as a free action on your turn. You don’t need to hold on.

Throw: If you amassed at least half your foe’s HP in CP, you may spend CP to attempt to throw them to the ground. First “spend” accumulated CP equal to half the foe’s hit points (round up) to attempt the move. Then roll to hit normally, using the new AC penalty, not the old one. If successful, your foe is stunned for 1d4 turns and takes 1d4 + Strength modifier damage.

Grab Item: If you amassed more CP than 1/2 the wielder’s current HP, you can try to grab it. Roll to hit vs. the foe’s armor class as usual. If you succeed, you take it.
If the super has a Mental Attack it can be given a different attack mode such as Aura, Bolt, Continuous, Sword (or other melee weapon), or Touch.