Another Guardians preview as the countdown to release continues.

Many heroes and villains are Bruisers who excel at battling their opponents and taking punishment without flinching. Although many bruisers rely on hand-to-hand combat, this class is also suitable for supers who use a mix of close and ranged attacks, as well as flyers and speedsters. Strength is an important ability for Bruisers and those with a Strength of 13 or better receive a 5% bonus to all experience earned.

Bruiser progression looks somewhat similar to a classic Fighter. In addition Bruisers get these class abilities:


Combat Specialty: Bruisers may select one Combat Specialty from the list given below; a human or exotic get two due to having super-training instead of powers. The specialties are:

Acrobatic: The character’s fluid fighting style improves his or her Armor Class by two, as long as the character is unarmored (except for any armor built into gadgets) and free to move about.

Brawler: The character’s ability to give or take a pounding gives DR 2 damage reduction.

Berserk: The character fights with a barely contained battle fury. In any highly stressful situation (referee’s discretion) the character may go berserk and attack enemies or obstacles with an insane rage. To avoid this roll a Charisma saving throw at -4. Otherwise, the berserker must charge toward or attack the enemy or obstacle in melee each turn and cannot retreat, surrender, used ranged attacks, or talk coherently until it’s defeated! It costs 1 energy point per round to rage. The berserker cannot stop until the fighting ends or he or she is out of energy! While berserk add +3 to Strength but Armor Class worsens by 2.

Weapon Wielder: A Bruiser does not usually fight with weapons or use a shield, but with this combat specialty the bruiser may freely carry and use ONE specified weapon e.g., a hammer, whip, sword, shield, etc. Thus, a bruiser could have Weapon Wielder (Hammer). They receive a +1 to hit and damage with this weapon.

Weapons and Armor: With the exception of powers built into their own gadgets, a bruiser may not wield weapons or use shields unless they have the Weapon Wielder ability and may not wear ordinary armor.

A character may opt to take an additional combat specialty in lieu of a new power or gift. 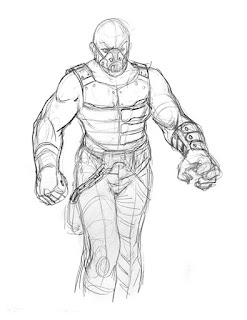